In order to be able to ask questions in Twi, you’ll need to, first, know your question words. Today’s lesson begins a series on Twi question words. I consider this series a very important one, and advise each learner to take all the lessons in the series seriously.

Question words, as we have them in both English and Twi, can be used as pronouns, or as determiners.

We have previously given a basic definition for pronouns as words that replace nouns and noun phrases. This means pronouns, having replaced nouns, take on the function(s) of the nouns that got replaced.

Let me explain further with an example:

In the sentence above, Kofi is a noun, and it functions as the subject. If we replace Kofi with a pronoun:

“ɔ (ɔno)“, which is “he” in English takes on the subject function that Kofi played in the same spot. So the pronoun ɔno (he) becomes a subject pronoun.

We can also use a pronoun to replace football, which is acting as the object noun in the sentence above.

Now, we can also change the statement Kofi plays football into a question. We can form two types of questions out of this statement:

We are interested in the second question type. As you can see, we have replaced the object noun football with the question word what? Having done this, and with the core function of pronouns in mind, the question word what is now being used as a pronoun (since it’s been used to replace a noun). It is pronouns like this one that we term as interrogative pronouns.

We can also ask:

You will also need to know the difference between the two in order to fully grasp the lessons that will follow in the series, as they will come with both versions: interrogative pronouns and determiner question words.

STEPHEN AWIBA, known by his students as YAW, is the founding editor of LEARNAKAN.COM and LEARNAKANDICTIONARY.COM. He was born and raised in Kumasi, the Ashanti regional capital of Ghana, where Akan (Asante Twi) is spoken as the first language. He holds a Bachelor's degree in Linguistics and Theatre Arts from the University of Ghana and an MPhil in English Linguistics and Language Acquisition from the Norwegian University of Science and Technology (NTNU). 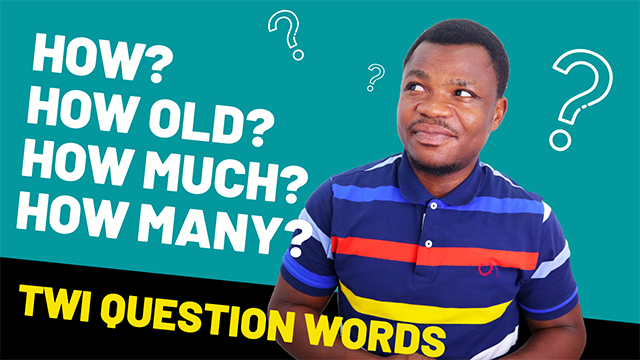 The present lesson is the seventh in the series on Twi Question Words. Thus far, we’ve had a video each on the introduction, 4 ways

Welcome to the sixth lesson in the series on Twi question words. Thus far, we’ve had a lesson each on: Introduction to Twi Question Words

This is the fifth lesson in the series on Twi question words. Thus far, we’ve had a lesson each on the introduction, 4 ways to

Thus far in the TWI QUESTION WORDS series, we have looked at: Introduction to Twi Question Words 4 Ways to Ask “What?” in Twi Who?

LEARNAKAN.COM is a community-based e-learning website dedicated to helping you to read, write and speak the Akan language, spoken in most parts of Ghana in West Africa. The site was set up in June 2016 and officially launched on July 17, 2016. Here, you will find a wide range of useful lessons touching on the very important aspects of the language such as pronunciation, vocabulary, grammar, speaking, listening, reading.