Welcome to the second and last part in our series on time-telling. In the first part, we looked at how to tell the o’clocks in Twi. The present one takes a look at the irregular times, the likes of 4:15, 9:21, 2:01, etc.

There are typically two ways to tell the irregular times in Twi, just like it is in English.

In English, you can tell the time:

Let’s look at more examples in the table below:

Follow me
Tikya Yaw
Founding Editor at LEARNAKAN.COM | MYTWIDICTIONARY.COM | LEARNAKANFLUENCYCLUB.COM
STEPHEN AWIBA, known by his students as TIKYA YAW, is the founding editor of LEARNAKAN.COM and MYTWIDICTIONARY.COM. He was born and raised in Kumasi, the Ashanti regional capital of Ghana, where Akan (Asante Twi) is spoken as the first language. He holds a Bachelor's degree in Linguistics and Theatre Arts from the University of Ghana and an MPhil in English Linguistics and Language Acquisition from the Norwegian University of Science and Technology (NTNU). 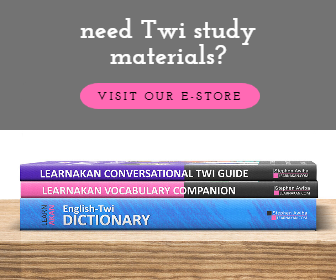